We’re at your side, here’s what we're doing about COVID-19

*15% discount offer applies to regular priced item. Offer will be sent by email within 24 hours. 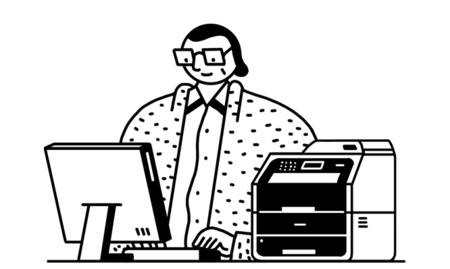 How Will You Benefit

from signing up with Brother?

and get the latest updates on our products
0

We're straightforward, friendly & reliable – that’s the kind of people we are.
Like our products, we're always here for you.
It’s what we mean when we say “at your side”.

If you’re here, it’s probably because you’re a big fan of Brother products or you’ve just discovered them and would love to know more. Or it’s because you’re thinking about joining our team of great people. Well, everything you ever wanted to know about Brother Canada and more is right here. Enjoy the read.

As with a lot of successful companies, we started out small. In fact, back in 1960, our first Canadian office was located in a one-room office sharing storage space with the Eastern Venetian Blind Company. Many years later, in 1990, our current location was built on the premises of an old drive-in theatre. We’ve come a long way, as they say; and even though we’ve gotten bigger over the years, like a whole lot bigger, we’ll always remember our humble beginnings.

Like Brother Global, which started out in Japan as the Yasui Sewing Machine Company 52 years earlier and diversified into typewriters and office equipment, we’ve always prided ourselves on being a quality-driven company. And because we were founded by two brothers, it goes without saying that we’re also a family-oriented company, one that believes in making customers feel right at home.

Thirty years after our arrival in Canada, we had a brand new building on a 200,000-square-foot lot. That’s about three football fields, and a heck of a long way from our days sharing storage space with our friends from Eastern Venetian. In fact, we were slowly becoming what they call a household name. We did it by taking all of our know-how and experience at making the world’s best sewing machines, and translating it into office equipment. Typewriters, cash registers, adding machines, calculators, word processors – you name it, Brother made it. And we made it really well. Of course, we didn’t stop there. Always thinking about what consumers may need next, we expanded our office repertoire into electronic labellers, laser printers, fax machines, scanners and multi-function centres.

As our little company grew into a big company, we expanded our operations across the country: a distribution centre in Vancouver in the early 80s; a Toronto office in 2014; a Greater Toronto distribution facility in 2017; and sales teams across the country. All this to keep giving our customers nothing but the best customer experience possible.

Today, Brother is one of Canada’s most trusted names because we’ve always understood that the best products and the best service always go hand in hand. From sales to product marketing, distribution and service, we consistently deliver on our “at your side” promise, day in and day out, because for us, it’s more than a promise; it’s in every single thing that we do.

We're proud to be part of the bigger picture that is Brother Global and we're thrilled to deliver the Brother experience to Canadians.

GET TO KNOW BROTHER CANADA

Always looking forward. Always at your side.

It all began when Kanekichi Yasui started the Yasui Sewing Company. With his son Masayoshi, who was very talented at sewing machine repair, and his brother Jitsuichi, who developed the sewing machine’s main component, the shuttle hook, they worked very hard to live up to their motto: superior quality and diligent service. Values that today, live on in our signature: At your side. Sewing together a dynasty

Ever the innovators, the Yasui brothers developed the first chain-stitch sewing machine to make straw hats. However, that was only the beginning. By 1932, they produced and marketed the first domestic sewing machine ever made entirely in Japan. World War II brought the sewing machine production to a halt as they turned their attention to industrial machines. Post-war, they refocused on sewing machines, helping to meet the demand for a nationwide clothing shortage. A Brother in every home

By the 1950s, domestic sewing machines were all the rage and could be found in 70% of Japanese homes. Strong demand led to big domestic growth and a new corporate headquarters was built. This was the official birth of the Brother name, when the company changed its name to Brother Industries. Along with the new name came new ventures – with Brother expanding into home appliances, knitting machines, electric fans, washing machines and even a motorcycle named Darling.

After establishing a U.S. base in New York in 1954, Brother set its sights on the Great White North. The year was 1960, and Hal Kalker, one of Brother’s top American salesman, set up a modest sales base in Montreal. At the time, Canada’s most important garment manufacturing business, industrial and banking centre. The move paid off; Kalker grew the company even more – putting topnotch Brother sewing machines and typewriters on the Canadian market.

Brother takes on the world

Always on the lookout for new opportunities, Brother gave 300 brand new typewriters to journalists at the 1964 Tokyo Olympic Games. A brilliant marketing move. In fact, in only a few years, Brother was building typewriters in more than 20 languages and exporting them to 110 countries. Making typewriters along with sewing machines, Brother’s flagship export product. The 1970 World Fair in Osaka. A big turning point for Brother. The world begins to recognize Japan as a producer of innovative, high-quality products at competitive prices, and Brother was right there with “mechatronics technology”. That’s geek-speak for combining mechanical technology and electronics technology. 1982 marked the release of the world’s first and smallest battery-powered electronic personal printer (EP-20) by, you guessed it, Brother. Not one to sit on our hands, we followed up with a labelling system using thermal transfer technologies and then, in 1987, fax machines. The launch of this family of products was a real milestone for Brother. It created a blueprint for the company for years to come as a serious innovator and provider of office equipment for the information age.

By the late 1980s, Brother was considered a major player in the fax market, but by the early 1990s, fax sales began to slow down. Rather than pull out of the market, Brother put a new spin on the fax by creating the FAX-600 for the U.S. market. A wise business decision, and a new boost in sales in a new category – the small and home office market, aka SOHO.

Throughout the 1990s, personal computers became embedded in both home and office environments. Thanks to the Internet, the workplace now expanded into the home, and the SOHO market expanded. In 1995, Brother launched the Laser Digital Multifunction Center™ integrating fax, printing and copying into a single unit, and then, the Colour Inkjet Digital Multifunction Center™. Brother was ready like never before to grow with and take on the needs of the information age. Brother Global is always ready for what’s next. In constant communication with worldwide offices such as Brother Canada, Brother always strives to meet local needs through active research and development of imaging and printing products. As a major player in the business machines industry, Brother expanded its worldwide reach in 2005 with 10 sales offices around the globe. In 2008, we celebrated our big 100. No small feat for a company founded by a couple of brothers. However, just because we were 100 didn’t mean we were going to relax. Not at all, because delivering high-quality products and services that you can always count on has always been, and always will be, how we like to do things.

Brother wins a spot as one of the 2012 Thomson Reuters Top 100 Global Innovators. Brother didn’t get to be one of the top innovators by leaning on its reputation. Brother got there by working hard every single day to develop and deliver innovative products and services that our clients can always count on. THE WEST ISLAND OF MONTREAL CHAMBER OF COMMERCE ACCOLADES

Brother Canada really takes the cake. In 2015, they also took the awards for Distribution, Human Resources, as well as the very prestigious Business of the Year. It’s what you get when great people get together every day to do great things for our clients.

You're shopping from a location where delivery is currently unavailable (Nunavut, Northwest Territories, Yukon).

If you a shipping address in one of the provinces below, please select it to continue with your online purchase.

Otherwise, you can continue browsing to find a retailer, get info about Brother products, contact Customer Care and explore creative projects.

No thanks, I don't want any deals